CELEBRATING A BIRTHDAY MILESTONE IN THRILLING FASHION WITH THE MONTREAL CANADIENS

NELSON, BC--When the Montreal Canadiens Alumni Team visits Nelson in late-January to take on the Kootenay Patricks for the Make A Change Canada charity game, a career pick-up hockey player will have the best seat in the house.

On January 23, Paul Major will celebrate his 70th birthday in memorable fashion when he pulls on the fabled Canadiens jersey and joins the alumni squad on defence. Signed up as one of the game’s “thrill of a lifetime” participants, Major will take a regular shift with former stars of the NHL.

“The passion for the game has never been higher for me,” says Major. “I have always liked hockey, but never as much as this.”

Growing up in Windsor, Ontario, in the early-1960s, the game actually shut a door on him.

“If there was minor hockey, you had to try out for it… you couldn’t just pay and play,” says the Nelson resident. “And I could never make it; I wasn’t good enough. So a couple of years later, I rented the ice and invited my friends to play pick-up. It has been that way ever since.”

When he was 25, Major joined a group of old-timers who were kind enough to let him play despite being much younger than the rest of the crew. He played weekly pick-up with the same group for 30 years until he retired from teaching elementary school. Upon retirement, Major and his wife, Mary, immersed themselves in their shared passion—sailing. The couple moved to the South Pacific to live on a sailboat for 10 years where the game of hockey was not to be found.

The Majors were lured back to land-life in 2015 after deciding to be closer to their son, daughter-in-law, and two young grandchildren who had established themselves in Nelson. An active pick-up hockey community in Nelson presented plenty of options, and Major was back on the ice with a whole new enthusiasm for the game.

“I’m really pleased that I am still healthy enough to play at 70,” says Major, who has been training extra for the upcoming alumni game. “And the thing about living in Nelson with all the ice time that is available, I’m actually getting better. I’m on the ice six days a week for two hours at a time. I’m not anywhere at the level of these guys that I will be playing with and against, but I’m getting better.”

When Major found out that Make A Change Canada was bringing the Montreal Canadiens Alumni Tour to Nelson on January 23, it was too coincidental that the game fell on his actual birthday. When he started telling family and friends that he was thinking about participating in the game as a “thrill of a lifetime” player, he received an outpouring of support to help him raise the $1,500 registration required to join the Canadiens’ line-up. Major received a flood of donations from across Canada, many from those he played pick-up hockey with over the years.

“I’m so thankful and very fortunate that I have so many family and friends that were willing to share in the excitement of me being in this game on my 70th birthday,” says Major, who will end up giving more than the $1,500 required as his contribution to Make A Change Canada.

Major admits that he is more a fan of participating in the sport than the spectacle of professional hockey. As a kid, he travelled across the bridge to Detroit where he watched Gordie Howe and the great Red Wings team play in the historic Olympia Stadium. But once expansion hit the NHL in the late-1960s, he stopped paying attention to the professional ranks.

“I understand the significance of the franchise and the importance the Montreal Canadiens has when it comes to the history of hockey,” he says. “But, I have always been a bit quiet when it comes to dressing room conversation about professional hockey. People will start to talk about it, and I just have to listen because I honestly don’t follow it. I just love playing it… I really love playing it.”

Based in Nelson, Make A Change Canada is one of just over 200 charities in Canada accredited under the Imagine Canada Standards Program. The organization provides online employment, self-employment, and skills training to people who face barriers to employment. Clients include people facing all types of challenges from youth and single parents, to those living with a disability or chronic health issue, to those living in rural and remote areas.

Tickets for the January 23, 2020, game are now on sale and can be purchased online at makeachangecanada.com/charity-hockey-game. Those preferring an in-person location can order tickets through Mallard’s Source For Sports in Nelson and Castlegar, at Stuart’s News in Nelson, or at Second Look Used Books in downtown Castlegar. For information on sponsorship packages for the game and other ways to get involved, email Anne-Marie Edgar, Executive Director, at amedgar@makeachangecanada.com.

About Make A Change Canada/Faire un Changement Canada
Make A Change Canada/Faire un Changement Canada, incorporated in 2004, is a national nonprofit and charitable organization, and is accredited under the Imagine Canada Standards Program. Make A Change Canada develops and delivers online training, programs, and mentorship to anyone facing barriers to employment. We are an online hub for job seekers, employers, and partner agencies seeking to empower themselves or others to realize their full economic, social, and human potential. Clients include people living with a disability or chronic health issue, youth, stay-at-home and single parents, older workers, Indigenous Peoples, new Canadians, members of the LGBTQ+ communities, and people living in rural or remote areas. For more information, please visit www.makeachangecanada.com. 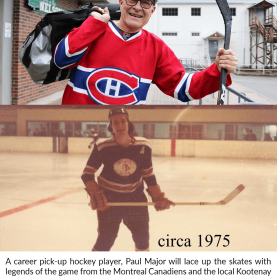