NELSON, BC--It happened more than five decades ago, but Mike Laughton remembers the moment like it was yesterday.

A member of the Oakland Golden Seals in 1967, the kid from Nelson was playing in his first game in the fabled Montreal Forum. In his rookie season, the young centre made his way to the ice in the most sacred shrine in hockey against a team that won six Stanley Cups in nine years between 1965 and 1973.

“You walk into the Forum and you are in awe,” Laughton recalls with a smile 52 years later. “It took me ten seconds to get on the ice, all the guys were pushing me from behind, because I was looking at all the lights and the seats. There is such a story to that arena so I took my time. A kid from a small town… what do you expect?”

That year the Montreal Canadiens would capture the Stanley Cup at the close of the 1968 NHL season with legends like Henri Richard, Yvan Cournoyer, Gilles Tremblay, Jacques Lemaire, John Ferguson, Serge Savard, and Gump Worsley on the roster. The captain of the Habs that season was one of the greatest ever.

“Who do I faceoff against? Jean Beliveau,” Laughton says of the man who won 10 Stanley Cups with Montreal and still sits second all-time in franchise points with 1,219. “He was kind of an idol growing up. I could not believe what a polite man he was, but also how big and strong he was. I was fairly decent on the faceoffs, but he could pull me right across the circle and smile. He was a tremendous player and a tremendous individual.”

Laughton is a West Kootenay hockey pioneer. The first Nelson-born player to make it to the National Hockey League, the 75-year-old’s highlight reel is packed with wonderful memories of the game he learned in the modest mountain setting of his hometown.

On January 23, 2020, Laughton will be on his own turf when he gets behind the bench at the Nelson & District Community Complex as coach of the Kootenay Patricks as they take on the Montreal Canadiens Alumni team. The charity hockey game is being organized locally to raise funds for Make A Change Canada.

Though the Canadiens side has not been announced yet, one guarantee is that the ex-NHLers who pull on the all-so-familiar Habs jersey that night will not steamroll their way through the competition. The local Kootenay Patricks roster features plenty of firepower and names that local hockey fans will recognize from their days playing pro, high level junior, and NCAA. Those facing off against the Canadiens Alumni include Matt Walker, Simon Wheeldon, George Trainor, Aaron Shrieves, Shane Glover, Derek Diener, Brock Johnson, Doug McMullin, Justin Pickerell, and more.

“A lot of these kids did command a lot of attention when they were young; people of all ages will remember them playing minor hockey,” says Laughton, who coached many of the players at one time or another through summer camps and minor hockey. “These guys can still play; it will be a fun game. I’m looking forward to it, just having some fun on the bench with the fellas.”

The Kootenay Patricks team name tips its helmet to Lester and Frank Patrick, two of the most indelible figures in the history of hockey who have a strong connection to the region. Their time spent in the Nelson area was relatively brief, but in the early part of the 20th Century when the sport was still cutting its teeth, the period was vital.

Based in Nelson, Make A Change Canada is one of just over 200 charities in Canada accredited under the Imagine Canada Standards Program. The organization provides online employment, self-employment, and skills training to people who face barriers to employment. Clients include people facing all types of challenges from youth and single parents, to those living with a disability or chronic health issue, to those living in rural and remote areas.

Tickets for the January 23, 2020, game are now on sale and can be purchased online at makeachangecanada.com/charity-hockey-game and at locations in Nelson and Castlegar. For information on sponsorship packages for the game and other ways to get involved, email Anne-Marie Edgar, Executive Director, at amedgar@makeachangecanada.com.

About Make A Change Canada/Faire un Changement Canada
Make A Change Canada/Faire un Changement Canada, incorporated in 2004, is a national nonprofit and charitable organization, and is accredited under the Imagine Canada Standards Program. Make A Change Canada develops and delivers online training, programs, and mentorship to anyone facing barriers to employment. We are an online hub for job seekers, employers, and partner agencies seeking to empower themselves or others to realize their full economic, social, and human potential. Clients include people living with a disability or chronic health issue, youth, stay-at-home and single parents, older workers, Indigenous Peoples, new Canadians, members of the LGBTQ+ communities, and people living in rural or remote areas. For more information, please visit www.makeachangecanada.com. 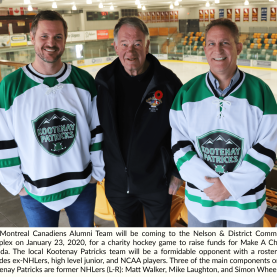